Institute 193 collaborates with artists, writers, and musicians to document the cultural production of the modern South.This April, Institute 193 is publishing the Cosmic Giggles, a graphic novel/comic, featuring over 100 drawings by Charles Williams, using scans of photocopies the artist made at IBM in the early 1980s. This publication is produced in conjunction with the exhibition The Life and Death of Charles Williams at Atlanta Contemporary.Beginning sometime around 1975, Charles Williams embarked on the creation of a series of drawings he referred to collectively as the Cosmic Giggles that recount the exploits and observations of Martians visiting Earth. During their travels around our world the aliens witness homelessness, racism, pollution, gas shortages, and other societal ills. They ultimately decide to return to their planet, thus avoiding any potential war of the worlds.Williams worked avidly on paintings, drawings, assemblages, sculptures, and furniture until his untimely death in 1998, the result of AIDS-related complications and starvation. A few months later Moveable Feast Lexington was founded in his honor and tasked itself with providing hot meals to people living with HIV/AIDS in the region. In death, Williams had finally become a catalyst for the kind of change he had advocated for in his comics, drawings, and sculptures but his work remains almost completely unknown.
[Read more]Please help support this Institute 193-Kickstarter project [Donate now]
Learn more about Institute 193 [Click Here] 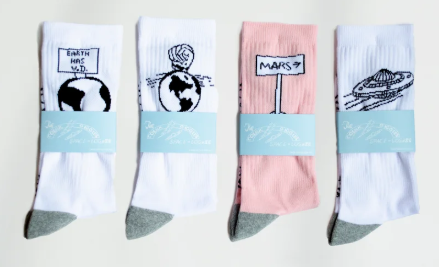 Inspired by Cosmic Giggles, a comic book mini-series by the late Lexington artist Charles Williams, these interstellar socks are sure to add some starshine to your outfit. The socks are available in four designs, and produced in honor of the first major museum retrospective of the artist's work, entitled The Life and Death of Charles Williams, held at the Atlanta Contemporary Art Center, curated by Institute 193 founder and Curator-at-Large Phillip March Jones.

Proceeds from the sale of this item benefit the non-profit  Moveable Feast Lexington, the founders were motivated to create the organization after the death of Charles Williams in 1998, an artist living with AIDS who died of starvation at his home in downtown Lexington, only a few blocks from City Hall.