" A lot of my friends are gone and i feel like God gave Michael Thompson enough time to put Moveable Feast together."

"Moveable Feast is not ever bogged down with bureaucracy-if you call up and say I need food, you will have a delivery that night. Before they've even met you or know anything about you, they will make sure you have a meal that night that's refreshing that there's still that feeling of activism, all you have to do is give them an address."

In the United States, where almost half of our food is literally thrown out every day nationwide,[1] one demographic exists that is especially susceptible to starvation: people living with HIV/AIDS. Even here in Kentucky, a state celebrated for its culinary spectrum, the late African American artist, Charles Williams, died in 1998, not because he’d been living with the virus, but due to starvation. Williams, born in Blue Diamond Kentucky, created a vast body of diverse work making a significant impact on the local art community. Williams lived in downtown Lexington, just a few blocks from City Hall.

Later that year, Williams’s needless death motivated the late Michael Thompson, a well-known HIV/AIDS activist along with Carol Farmer, to deliver leftover food from local restaurants to people they knew in similar need. With the help of other friends and activists along with the Episcopal Aids Ministry and the inspiration of similar organizations in Atlanta and Baltimore, MFL raised enough funding to remodel St. Augustine Chapel on UK’s campus to serve as their first kitchen.

After a move to St. Martha’s Episcopal Church in 2005, in April 2008, the organization moved to a building on the corner of Fifth Street and Silver Maple Way, a fixer-upper formerly known as “Nanny’s Soul Food,” a favorite local restaurant before it closed. The newly renovated commercial-sized kitchen, which was originally built as a grocery store in the 1890s, would henceforth serve as Moveable Feast Lexington's permanent home.

" You save $41,000 a year if you prevent hospitalization—it’s preventable by people maintaining their health. The cost benefit is huge but people don't think about that when they're judging us. They just think we're bringing food to a bunch of HIV people. It's so much more than that."

One of the most terrifying threats of terminal illness is called cachexia or “wasting syndrome.” A combination of fatigue, loss of appetite, involuntary weight loss, loss of muscle and skeletal mass—“wasting syndrome” results in the loss of body mass that cannot be restored or reversed by nutritional means alone. In combination with the underlying condition, “wasting syndrome” multiplies the chances of premature death. In many cases, with the added barriers of low income, high healthcare costs, and limited interpersonal support, severe malnutrition is a true threat. A healthy diet is one factor that can help prevent malnutrition which may lead to hospitalization or death due to cachexia. In April 2014, MFL served 114.5 meals a day. The hot meals are prepared every weekday and include a meat protein, carbs, vegetables, fruit, and dessert. Occasionally, cold lunches are provided as well. The meals are then packaged individually and delivered to clients, children, and care-takers by volunteers.

The importance of keeping MFL in business cannot be overstated. Lexington/Fayette County alone has the second-highest rate of HIV/AIDS in the state, second only to Louisville/Jefferson County. The need for an organization like MFL becomes especially clear when looking at the statistics of increasingly disproportionate populations within the city, particularly among women, African American, and Hispanic groups. For instance, while African Americans comprise only 13% of the total population in Lexington, they make up 36% of known HIV/AIDS cases. It is also currently estimated that in the coming years, MFL will see a rise in the number of Hispanic clients as well as clients who are increasingly younger.

Community-based intervention can address health issues related to the link between nutrition and chronic diseases, resulting in helping individuals make behavioral changes.[2] One roadblock MFL faces is a culture of silence in certain communities where the risk of HIV/AIDS and safe sex practices are not discussed openly. Now, thanks to a grant by the CDC, Moveable Feast Lexington offers the services of in-home counseling and testing for HIV for individuals who may require additional privacy.

" HIV is viewed as a limited population in a way, I think, and unless somebody knows somebody, they're not really strongly motivated to work with that group. It's the same with cancer. If you have been impacted by it, you're going to have more interest. Folks who are HIV positive are less likely to share that with other people so others don't realize how impacted they are by it."

"It’s not for everybody…but it’s very gratifying if you can do it. Volunteering makes you put your life in perspective. Sometimes you need that."

Moveable Feast Lexington depends primarily on the funding from public grants as well as private donations and fundraisers such as “Empty Bowls” and “Sunday Suarés.” Despite the rising numbers of individuals in need of their services, MFL continues to keep costs low by only employing three staff members. Each meal costs less than $2 both food and packaging. Costing approximately $15,000 to make thousands of meals a month, MFL continues to rely on contributions from the community to ensure that no one needlessly goes hungry.

While HIV/AIDS has increasingly become known as a “manageable disease,” lingering ignorance and stigma are factors that MFL must combat daily, necessitating a body of extraordinary volunteers. Approximately 35 compassionate volunteers willing to make deliveries throughout the week use their vehicles and pay for their gas to ensure that Moveable Feast Lexington remains a priority in this city. Thus, volunteers learn how their service makes a real-time impact in that they are helping to save lives. 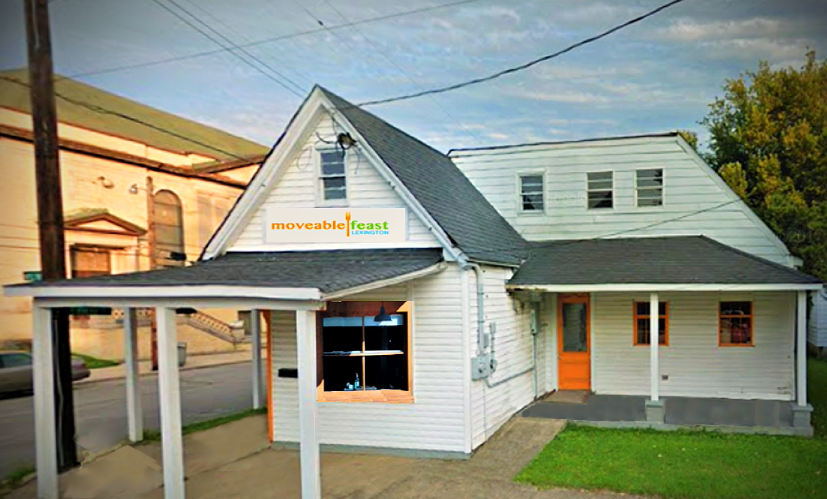 Without the continued contributions of committed staff, board members, and volunteers, the mission of MFL would not be possible, leaving over a hundred clients a day without access to not only a meal but in some cases, the only contact they will have all day with the outside world.

[2] “Engaging the Community to Improve Nutrition and Physical Activity Among Houses of Worship” by Kiameesha R. Evans and Shawna V. Hudson (Mar 13, 2014)

Moveable Feast Lexington is a 501c3 non-profit that gets 40% of its funding from public and private grants. The other 60% of its budget comes from private donations and fundraisers. Instead of focusing on one or two big fundraisers a year, the organization devotes its resources to smaller, less costly fundraisers throughout the year. Fundraisers like May Feast, Food + Art = Life and Empty Bowls continue to not only raise money but also educate the community about MFL.